Here is a short text I wrote almost ten years ago (I’m not old, I’m precocious, it’s not the same). I wrote it in one go at almost one in the morning, only way to stop a coming panic attack, and promptly buried it for years in my hard drive.

My anxiety coming back to life lately, I thought it would be the perfect time to dig it out. You can blame the lack of logic on my emotional state back then 😀 (student life…).

Quick French lesson! La « page blanche », which is translated word for word by the « white page » and actually means the « blank page », is a metaphor for « writer’s block ». Hence the title of this text and why the blank page is mentioned a lot.

Forgive any potential mistake. Translation is an entire job for a reason, and this is just amateur work on my part. 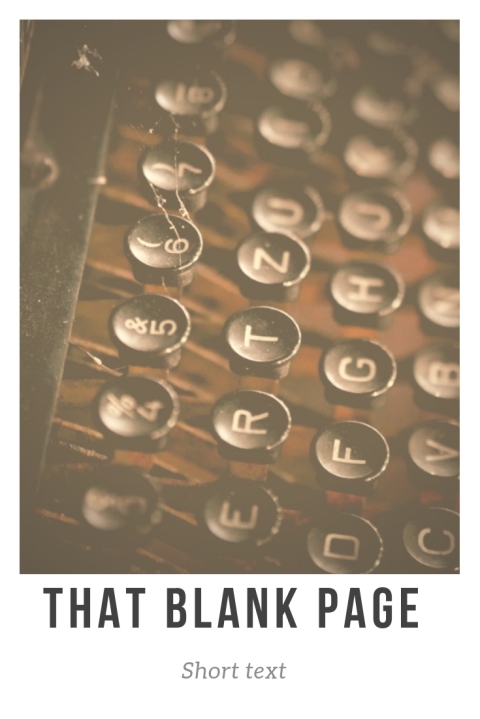 It woke me up again in the middle of the night, it was now two minutes to one and I was reliving an old night terror that came with half-conscious delusions since I was old enough to wonder. Sadly I was precocious, and had been confining myself to a hell of rhetorical thoughs for fifteen years.

It’s a insidious feeling, an creeping sensation, that makes me think that I will never finish anything. Lack of will, of time, of talent, since I was ten I made an enemy of that blank page. Nothing works. I live with it every day, every night, and its presence gets heavier and heavier everytime the teachers talk about books to read. Due to the lack of time, that page would never be filled. And will is a flame that falters when that blank page blows a breeze its way. Talent is something I don’t allow myself to have for fear that someday someone tells me I never had it in the first place.

It chokes me and won’t let me breathe, I feel myself suffocate. The fear of never doing anything pushes me to start things I’ll just give up on halfway because they amount to anything anyway. And then I think of a way to fix all that, and I always come to the conclusion that I lack time management. Too much things to do at the same time, between the reality and what goes on in my head. That’s when my night terrors come back to pay me a visit. So I wait, I panic in silence, I want to find someone to talk to and finally, I realize there won’t be anyone to listen.

It’s like I was on a different physical plane, overlapping with the real world. Sometimes there’s a contact, but most of the time everything goes through me. People are perfectly organized paragraphs, and I am that note in the margin, that doesn’t relate to text, would make more sense if developped. So we keep it, just in case, maybe someday i twill mean something.

That’s my thoughs, all that, and they’re completely disorganized. I think about what I have to do, what I will be doing, what I should be doing and what I would like to do. That’s a lot of things to think about, and thinking takes time. Then I give up and come back to the stories, and I have all these ideas coming to me at the same time, split up, overlap, refuse to put themselves in order. Impossible to keep in place, they constantly change. And here again, time comes to mock me. Putting all these ideas in chronological order? Even the six-headed monsters living in my nightmares are more realistic than that. If I can’t organize all my ideas, know in what order to put them on paper, I don’t see how I can write them. And there it is again; that blank page. It’s the worst, it doesn’t come for lack of inspiration, but a total incapacity to think one thing at the time. In the end, I go to sleep, and I’m still thinking the same thing.

My mind is a dysynchronic mess.